In 1911, discussion of building a Carnegie Library in McMinnville had begun. Tax funding and a library board were created by an ordinance in 1911. The first board, appointed by the mayor, included: Mrs. D.C. Apperson, Mr. Macy, Lulu Roger, O.O. Hodson and Ella Hendrick. Ernst Kroner of Portland was the chosen architect and plans were submitted and reworked throughout most of 1912. Local contractors’ bids were too high and a Portland firm, Wineland & Co., were the chosen builders with a bid of $8,880. The new building was insured by Oregon Fire Relief Association for $4,000. The library was completed in March 1913 and sits on the edge of City Park.

The original building is a regular rectangular block with a low-pitched hipped roof. A stained glass lunette above the doors displays a design of fir trees, a lamp and the words, “Carnegie Library 1912.” In 1982, a new addition of14,800 square feet was added to the original structure. This is one of 24 Carnegie Libraries in Oregon.

The McMinnville Downtown Association plans to submit an application to the State Historic Preservation Office in 2016 in hopes to have the historic district boundaries include this property. 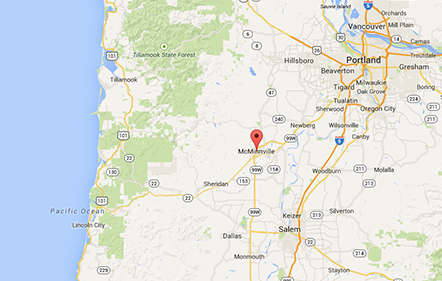